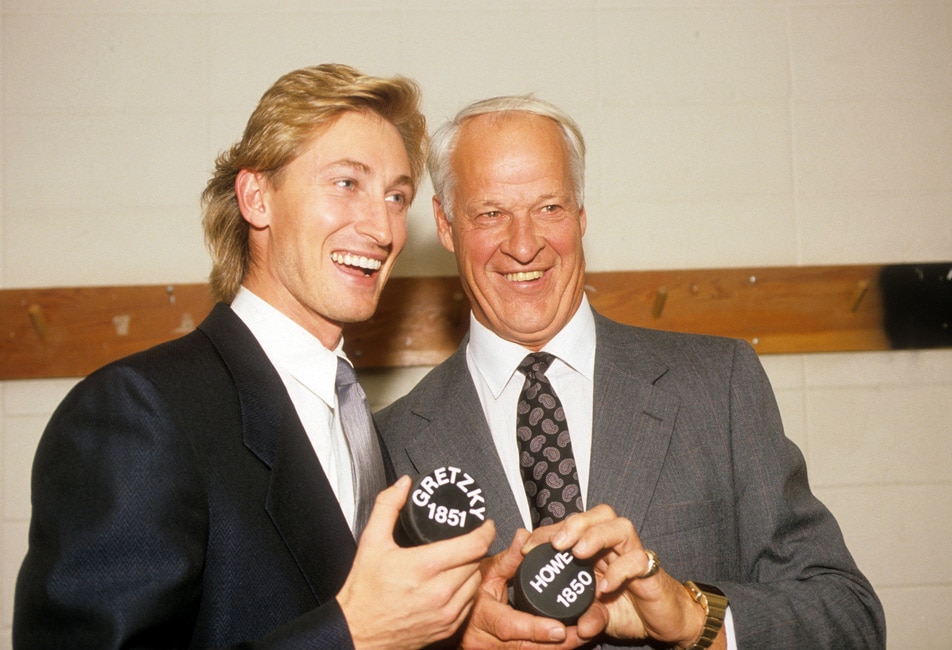 June 4 saw one of the greatest hockey players ever to take the ice put an end to his legendary career. In addition, there was plenty of National Hockey League playoff drama with memories in D.C., Denver, and New York City. The THW time machine is fired up and ready to take us on our daily journey to relive all the best moments this date has given us through the decades.

Mr. Hockey Hangs Them Up, For Real

Gordie Howe retired for the second and final time, at age 52, on June 4, 1980. Howe retired from the Detroit Red Wings in 1971, but he returned to the upstart World Hockey Association with the Houston Aeros two years later to play with his sons Mark and Marty. All three Howes played for the New England Whalers during the 1977-78 season. Howe got in one final NHL season with the Whalers in 1979-80. He played in all 80 games, scoring 15 goals and 41 points.

When Howe retired for good, he was the league’s all-time leader with 1,767 games played, 801 goals, 1,049 assists, and 1,850 points. Wayne Gretzky showed up and shattered all of his scoring records. His games played record was intact until Patrick Marleau broke it this past season.

Howe’s remarkable career included 21 All-Star games, six Hart Trophies for being the league’s most valuable player, six Art Ross Trophies for leading the league in scoring, and four Stanley Cup championships with the Red Wings. He was inducted into the Hockey Hall of Fame in 1972.

A Big Dose of Overtime

Alexandre Burrows was the hero for the Vancouver Canucks on June 4, 2011. He scored 11 seconds in overtime to give the Canucks a 3-2 win over the Boston Bruins in Game 2 of the Stanley Cup Final. The goal tied J.P. Parise’s mark for the second-fastest overtime goal in playoff history. Bruins’ forward Mark Recchi, 43-years-old, scored in the second period to become the oldest player to ever score in a Final game.

The Los Angeles Kings and New Rangers opened the Stanley Cup Final on June 4, 2014, at the Staples Center. The game headed to overtime tied at 2-2. Early in the extra session, Dan Girardi turned over the puck, and seconds later, Justin Williams scored to give the Kings a 3-2 win. It was Williams’ eighth goal of the postseason, with the Kings winning every game he scored in.

Two years later, the San Jose Sharks won their first-ever Stanley Cup Final game. Rookie Joonas Donskoi scored in overtime to beat the Pittsburgh Penguins 3-2 in Game 3 of the championship series. He became the sixth rookie in league history to score an overtime goal in the Final.

The Washington Capitals can fondly look back on June 4. In 1998, they advanced to the Stanley Cup Final for the first time in franchise history with a 3-2 overtime victory against the Buffalo Sabres in Game 6 of the Eastern Conference Final. Peter Bonda’s power-play goal drew the Capitals even with six minutes left in regulation. Joe Juneau scored off a Brian Bellows’ rebound, 6:24 into overtime, to give his team a historic victory.

On June 4, 2018, the Capitals picked up another huge postseason win. They beat the Vegas Golden Knights 6-2 in Game 4 of the Stanley Cup Final. The victory gave them a 3-1 series lead and moved them to within one win of the franchise’s first championship. Evgeny Kuznetsov was the offensive leader with four assists in the Capitals’ third straight win.

The Colorado Avalanche and Florida Panthers opened up the Stanley Cup Final on June 4, 1996. The Avalanche scored three goals in a span of 3:49 in the second period to secure a 3-1 victory. Patrick Roy, who made 25 saves, played in his 133rd postseason game, passing Billy Smith of the New York Islanders for the most all-time.

Three years later, the Avalanche visited the Dallas Stars for Game 7 of the Western Conference Final. Mike Keane scored two goals in the middle frame to help the Stars build up a 4-0 lead. Joe Sakic added a third period, but it was too little, too late as the Stars advanced to the Stanley Cup Final for the first time since 1991 when they were still in Minnesota.

On June 4, 2001, the Avalanche hosted Game 5 of the Stanley Cup Final versus the New Jersey Devils. Alexander Mogilny scored the game-winner and added an assist in the Devils 4-1 win. Mogilny snapped a 15-game goal drought with his tally.

Plenty of Business on Broadway

The Rangers were a very busy team on this date throughout the years. On June 4, 1963, they made a big trade with the Montreal Canadiens that included two future Hall of Fame goaltenders. They traded Gump Worsley, along with Dave Balon, Leon Rochefort, and Len Ronson, in exchange for Jacques Plante, Phil Goyette, and Don Marshall.

Plante played just two seasons for the Rangers before announcing his first retirement, while Worsely won four of the next five Stanley Cups in Montreal.

Emile Francis was replaced as Rangers’ head coach twice on this date. The first time coming on June 4, 1968, when Bernie Geoffrion was named his replacement. Five years later, it was Larry Popein’s turn to take over for Francis.

On June 4, 1981, Herb Brooks got his first NHL job when he was named the new Rangers’ head coach, replacing Craig Patrick, who was promoted to general manager. Brooks took the Rangers to the playoffs in each of his first three seasons. He was fired 35 games into the 1984-85 season, with Patrick returning to the bench for the remainder of the season.

The Rangers took a 2-1 series lead on June 4, 1994, with a 5-1 victory at the Canucks in Game 3 of the Stanley Cup Final. After future Ranger Pavel Bure gave the Canucks a 1-0 lead just 1:03 into the game, New York scored five unanswered goals. Brian Leetch led the way with a pair of goals to bring his 1994 postseason total up to nine.

Billy Reay was named the new head coach of the Chicago Blackhawks on June 4, 1963, replacing Rudy Pilous. He remained behind the Blackhawks’ bench for the next 13 seasons, taking them to three Stanley Cup Finals and only missing the playoffs once. He is the franchise’s all-time leader for the most regular-season games coached (1012) and wins (516). Reay used to be the leader in playoff games and wins until Joel Quenneville came along.

On that same day, the Bruins claimed former Norris Trophy winner and future Hall of Famer Tom Johnson from the Canadiens for the waiver price of $20,000. He played two seasons in Boston, the final two of his 14-season NHL career.

Gretzky was awarded the Hart and Art Ross Trophies on June 4, 1984, after leading the league with 87 goals and 205 points in 74 games. This was his fifth straight Hart Trophy win and the fourth season in a row that ended with a Ross Trophy. He was also selected to the First All-Star Team. His Edmonton Oilers teammates Paul Coffey, Mark Messier, and Jari Kurri were selected to the Second Team.

On June 4, 1991, the Bruins named Rick Bowness as their new coach, replacing Mike Milbury, who had resigned to become the team’s assistant general manager. Bowness spent one season behind the bench, taking the Bruins to the Wales Conference Final.

The Red Wings beat the Penguins 3-2 on June 4, 2008, in Game 6 of the Stanley Cup Final to win their 11th championship in franchise history. When captain Nicklas Lidstrom skated to center ice after the game, he became the first European-born player to receive the Stanley Cup. Henrik Zetterberg, who scored the game-winning goal, won the Conn Smythe Trophy for being the most valuable player of the playoffs. At the age of 46, defenseman Chris Chelios became the oldest player ever to win the Stanley Cup.

Happy Birthday to You

Content machine and copy editor at THW. Covering the Blackhawks and the AHL Central while providing your Today in Hockey History and Prospects News & Rumors columns. Regional scout/trivia host/podcaster.