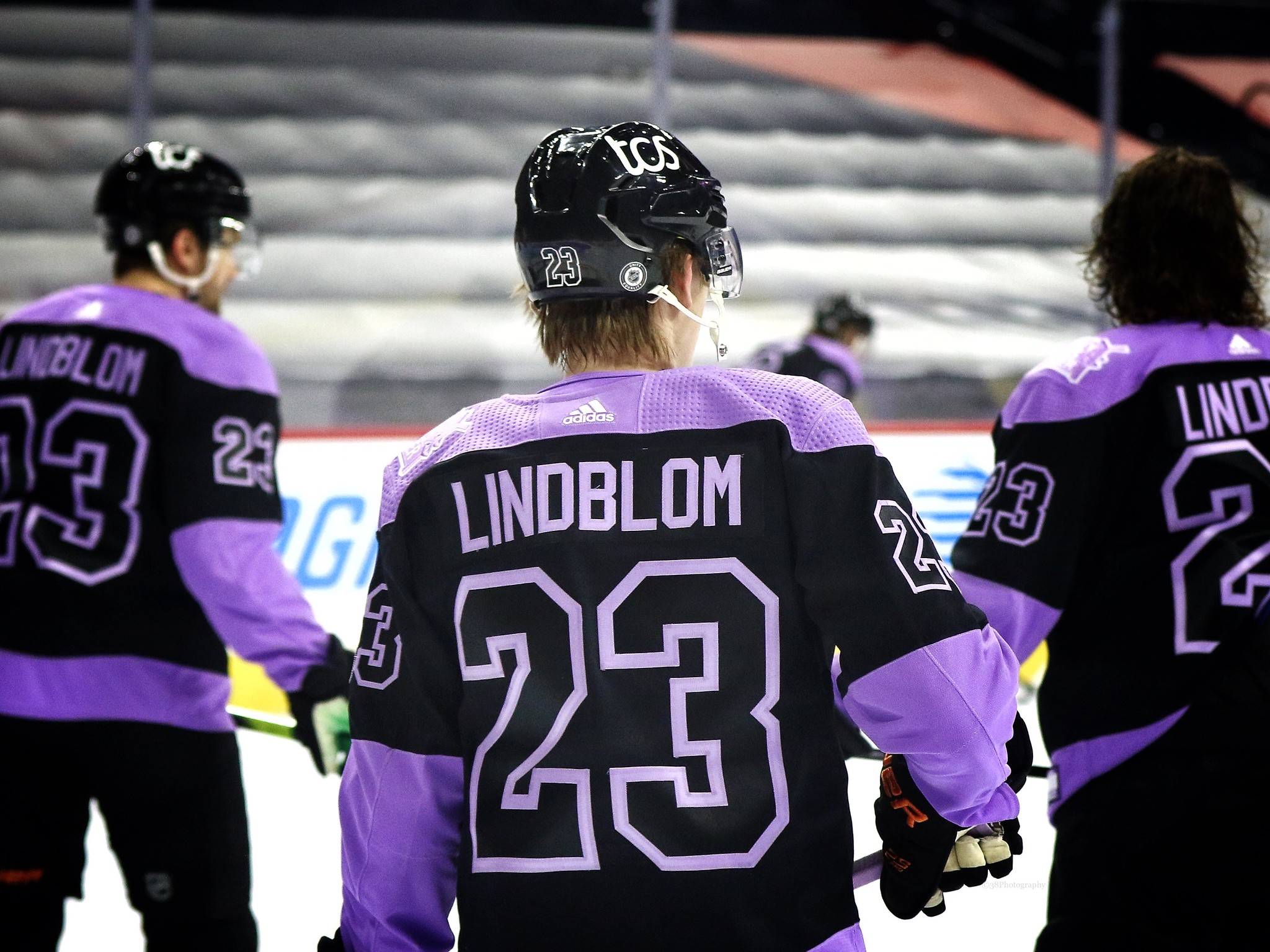 The 2020-21 season for Oskar Lindblom was a year in which there was going to be a noticeable drop in on-ice production because he was still getting his strength back after missing the majority of the 2019-20 season. Lindblom was diagnosed with Ewing’s sarcoma, a rare type of bone cancer, in December 2019 and was in the process of having a good season at the time of his diagnosis. He was one of the top players for Philadelphia during this period, with 11 goals, but had a more significant obstacle in front of him — beating cancer.

Lindblom received an outpouring amount of support from his Flyers teammates, from other players, the fans throughout his treatment and once he returned to playing for the Flyers. The support he received from his Philadelphia teammates and peers throughout the National Hockey League while he was undergoing treatment for his illness gave him the strength to battle Ewing’s sarcoma and return to the Flyers.

Lindblom remained close with his teammates and the organization throughout the 2019-20 season while he was being treated for cancer. The fight from him was an inspiration as he worked his way back onto the ice during the pause of the NHL season due to COVID-19. He returned as an active member on the Flyers’ roster in the middle of the playoffs last summer in Game 6 of the second-round series against the New York Islanders. The turnaround from Lindblom’s diagnosis to when he returned as a member for the orange and black motivated his teammates and was an inspiring story throughout the NHL.

The support Lindblom received from his peers in Philadelphia meant a lot to him:  “It’s been everything. They’ve talked to me as if I’m still on the team even if I’m not there. Those tough weeks when I felt so bad and trying to think about life, they’ve called me and texted me to help get me more energy and it helped me through the whole process. Now I’m here and happier than ever.”

Lindblom announced in December 2020 that he was cancer-free, which was a relief for him as the new season was to begin in January, and he could focus fully on the upcoming hockey year. The ovation Lindblom received at the PPG Paints Arena back in March of this season was a special moment for him as NHL fans could express their appreciation for the hard work he went through in defeating cancer and returning to playing hockey over eight months after his diagnosis.

Getting Back to Normal

In July 2020, Lindblom secured his immediate future with Philadelphia, as he signed a three-year deal worth $3 million per year, and he prepared to play a full season after a year of battling cancer. The 2020-21 season started off well for the Flyers, and Lindblom contributed to the success of the second line at the start of the season. He was among the players to be placed in COVID protocol after an outbreak of the virus affected the roster and temporarily halted the team’s season. Lindblom did not finish with many points this season, as he had 8 goals and 6 assists in 50 games, but he did attempt to provide the Flyers with a spark in the midst of the slump the franchise faced during the season. He engaged in his first career fight in March during a game against the New York Islanders, which was unusual given that he does not have the reputation for being an enforcer.

The team continued to struggle, and head coach Alain Vigneault shuffled the lines, putting Lindblom with other linemates on the third and fourth lines in an attempt to find some consistency in a season in which Philadelphia was fading away from playoff contention.

Lindblom Honored for His Fight Against Ewing’s Sarcoma

Lindblom was in the process of regaining his strength in the 2020-21 season after missing most of 2019-20 due to his health. The organization honored him during the Hockey Fights Cancer Night before a game back in April in recognition of his battle with Ewing’s sarcoma. Lindblom mentioned he was overwhelmed with emotion during the game: “I’m just happy to be able to be here and play again. I didn’t know there was supposed to be anything about me during the game, so it was emotional and I was just trying to hold it together and focus on the game. Amazing moment and I will remember that for the rest of my life.”

Lindblom went through an emotional return to the NHL as he continues to get back into conditioning after he battled an illness. The current offseason will be an opportune time for him to continue to regain his energy in preparation for a typical NHL season that is not shortened due to COVID-19. The Flyers organization is entering a time of uncertainty after a disappointing season, but Lindblom has the potential to regain a prime role on the Flyers with a good offseason in preparation for training camp.

Matt grew up outside Philadelphia and has been a hockey fan for the majority of his life. Matt covers the Philadelphia Flyers for The Hockey Writers. He graduated from Neumann University in 2011 with a bachelor’s degree in English. Matt continued his education in Salt Lake City. He graduated from Salt Lake Community College in 2020 with an associate’s degree in Video/Radio Production. Matt has interned at ESPN 700 KALL in Salt Lake City and has covered sports for The Globe newspaper at Salt Lake Community College. Matt’s career goal is to cover sports in broadcasting, podcasting, sports radio and/or as a writer. In his spare time, Matt likes to exercise, listen to sports podcasts and read comic books.