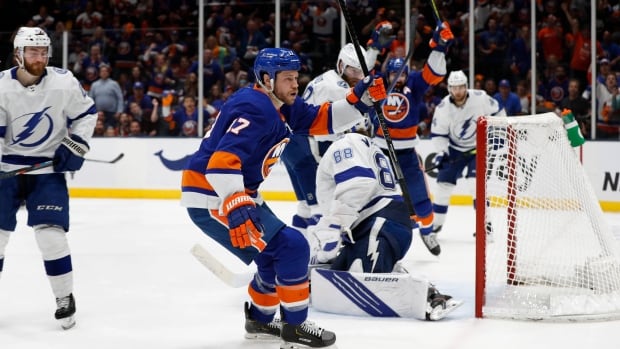 Matt Martin capped New York’s three-goal second period, Ryan Pulock made a diving stop in front of an open goal in the closing seconds and the Islanders held on to beat the Tampa Bay Lightning 3-2 Saturday night to even their Stanley Cup semifinal series at two games apiece.

Josh Bailey and Mathew Barzal also scored, and Cal Clutterbuck and Adam Pelech each had two assists. Semyon Varlamov finished with 28 saves to help the Islanders win a Game 4 to tie a series after dropping the previous game at home for the third time this postseason.

Brayden Point had a goal for the seventh straight game, and Tyler Johnson also scored for the defending champion Lightning. Andrei Vasilevskiy finished with 27 saves.

Game 5 is Monday night in Tampa, Florida, with Game 6 back at Nassau Coliseum on Wednesday night.

The Lightning pulled Vasilevskiy for an extra skater with about 1:50 left, but he returned to the ice 38 seconds later when Victor Hedman was called for tripping Clutterbuck to give the Islanders a power play.

Tampa Bay’s Ryan McDonagh had the puck on the left side in the waning seconds, spun around to get away from Brock Nelson and drew Varlamov forward before sending the puck at the open net. But Pulock’s dive kept the puck out and preserved the win.

Vasilevskiy gave up his most goals since he allowed four in Game 4 of the second round against Carolina. He had a shutout in the series-clinching Game 5 and then had limited the Islanders to five goals in the first three games of this series.

Johnson made it 3-2 nearly 3 minutes later as he got the puck in the corner, skated around one Islanders player, moved toward the net and beat Varlamov up high on the right side with teammate Ross Colton and Pulock screening the goalie.

Varlamov had six saves over the first 3 minutes of the second, including consecutive tries in close by Point that drew chants of “Var-ly! Var-ly!” from the home crowd.

The Lightning were outshooting the Islanders 17-4 at the time, but New York dominated the rest of the period as it scored three times while outworking Tampa Bay with a 17-3 edge on shots on goal.

The Islanders got on the scoreboard at 5 1/2 minutes on their third shot on goal of the period — and seventh of the game. Nelson brought the puck up the left side, drew a couple of Lightning players to him as he spun around and sent a cross-ice pass to Bailey, who quickly beat Vasilevskiy high on the glove side from right circle for his sixth of the postseason.

Barzal made it 2-0 with 6:14 left as he got the rebound of a shot by Clutterbuck from the right point and quickly put it into the open net from the left side with Kyle Palmieri screening Vasilevskiy in front. It was Barzal’s sixth of the playoffs, all coming in the last nine games.

Pelech sent a shot toward the net from the left side that was stopped by Vasilevskiy. The rebound went to the right side, where Martin backhanded it into the top left corner to make it 3-0 with 2:03 left. The Lightning challenged for offside on the entry into the offensive zone, but the play was upheld after a video review — confirming the Islanders’ seventh three-goal period in 16 games this postseason.

Playoffs are proving what most hockey fans already know, you need solid goaltending to win a Stanley Cup. 3:46

Avalanche sign Sikura, Matteau
Blues Sign Pavel Buchnevich to 4-Year Contract
Lightning Have Good Options to Replace Their Third Line
Predators Deal for Rittich Is a Win-Win for Both
Top takeaways from a $500 million first day of free agency